Less than two-weeks-ago, Roscommon player O’Rourke was joint-captain of the Irish team at the European U-22 boxing championships in Croatia. Leading by example O’Rourke came away with gold in the 70kg weight division.

In between, she travelled to Belfast for a training camp with the Irish Elite boxing squad. Then made sure she was available to tog out for Castlerea St. Kevin’s in their Roscommon Division 3 League match against Strokestown.

O’Rourke also played the majority of this season’s games for Castlerea Basketball club but they were idle last weekend.

Whether in the ring or on the field, O’Rourke is not one for taking a backward step or prioritising rest.

It’s no secret, plans to qualify for the 2024 Olympic Games in Paris. To follow in the footsteps of her older sister, Aoife.

But for as long as playing multiple sports is feasible, that’s what she plans to do!

While Roscommon were qualifying for tomorrow’s tilt against Wexford. O’Rourke was preparing for her European semi-final bout against Israeli Lia Pukkila.

Pre-fight, she was single-minded in her focus. As soon as she stepped out of the ring, her thoughts quickly turned to Parnell Park.

“I had a lot of texts from people saying congratulations and well done, but the one I really wanted to see was the one from Mam telling me that we had a League final to come. That the girls had beaten Kildare,” O'Rourke recalled. 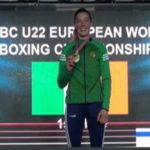 “I’ll have a different type of fight on my hands to win my place back on the team. All I can do is train as hard as I can once I get back and hopefully I’ll be able to play some part".

“I’m new to the panel but some of the girls that have been there a long time have played lots of semi-finals in the League and championship without winning any. So to win a game like that against a very good Kildare team has everyone in a great mood now, looking forward to the Wexford match.”

Lisa made her inter-county debut for the Rossies in 2020, making an immediate impact, scoring a goal against Offaly in the TG4 Intermediate Championship less than 10 minutes after entering the fray off the bench.

despite trialling for the county panel in 2021, she wasn’t selected, and when her inexorable rise up the boxing ranks continued, it seemed as if her footballing career might be limited to playing with her club.

After travelling to Tokyo with the Irish Olympic team and training with Aoife and the rest of the squad. It was only after some cajoling from her club coaches, O’Rourke put her hand up for Roscommon selection under Ollie Lennon’s new management team.

That proved to be a blessing for Roscommon as Lisa’s development has progressed at a rate far beyond anyone could have imagined.

O'Rourke's stamina and physicality is exactly what you’d expect from an international class boxer. Her skills and her team play have been exceptional, leading to selection in the pivotal centre-back position against Sligo. Where she was selected as player-of-the-match in Roscommon’s crucial six-point win.

In that fixture, Lisa was a meaningful presence under the Roscommon kick-out. Central to the core work of linking up the play and making good support lines.

O’Rourke has also tempered her tackling technique to greatly reduce the number of fouls conceded, while still holding ground and checking runners effectively.

All of her power and strength was still there! Along with her unique high hand-passing action, which she insists is just natural, not trained to exploit her height and reach advantage. Now it is part of the overall package of a proper, inter-county footballer

“This year has been great, the new management team is very positive, very encouraging. I’m loving it at the moment,”says O’Rourke

“Boxing will always be my number one sport, but as long as I’m able to keep everything going, I will.”

Like all great love stories, a little bit of rule-breaking is central to the plot. My boxing coaches “probably wouldn’t be aware of quite how much I’m doing with the footballers, they think I’m doing a bit more resting than I am!”

O’Rourke currently spends three days each week in Dublin, training full-time, before going home for weekends, supposedly to keep ticking over and resting for the week ahead.

It doesn’t quite work out that way, training with Roscommon on Friday nights, a game at the weekend, and fits in club and basketball activity when she can also.

“I wouldn’t be one for taking a day off!” declares O’Rourke. “My goal is to earn a spot in the World Championships in May, and if I can keep hitting all my targets, Paris in 2024 is on the cards”.

“It’s not clear yet what the weights will be at the next Olympics and obviously I wouldn’t go in against Aoife, I’ll be targeting whatever is the next weight down, but I have time to plan that out”.

“For now anyway, the cardio and athletic work you do for the footballers, even the skills and footwork, are all useful to have in the ring, so I think my boxing helps my football and my football helps my boxing” adds O’Rourke.

“But a boxing career could be over any time if you get the wrong setback or the wrong injury, and I want to have football and basketball there too, there could very easily come a time when one of those is the number one sport for me.

“Aoife would be the same, and some day maybe we’ll end up togging out together for Castlerea or Roscommon, it’d be great if that happened.”